Five down, one to go! Can you believe there is only one more week until all of the reveals are up? I can’t, that’s for sure. I seriously need to get a move on, come to think of it. But we made a decent amount of progress this week, so I think we will be okay.

Last week we finished off the lawn, so now we are just continuing to water it and waiting for it to take root.

We only had a relatively short to-do list at week one.

Looking back, I should have added more detail to the first item, just so I could cross more off. But now it’s done, so we get to move on!

This week, we got started on sprucing up the bar. And it looks good. Like, really good. We had decided a while ago to use wood-look tile for the bar facing, but the exact tile was tough to choose. We wanted longer boards (tiles?) that had a lot of character. The hubby wanted a gray color to match the worn fencing, but I wanted something more brown to warm up the space. We ended up going with Thomas Avenue Ceramics thanks to a good review from Young House Love. To be honest, we were both hoping the tile would look like the last photo shown, but there isn’t actually a ton of variance in the coloring. The tiles are mostly all a shade of gray, with just hints of brown. But the restocking and shipping fees made it basically impossible to return. So, we moved on ahead.

Before we could start tiling, we had to get the corners figured out. We didn’t want to have to miter tile again (we learned how annoying it is with the master bathroom). We thought about adding steel angles to match the planter boxes. But we didn’t want to see a bunch of bolt heads, so the hubby and his dad made their own angles. They bent the metal so that we could attach the corners directly to the concrete blocks, and then tile over all of the bolts. We just screwed each of them to the corners and called it a day. 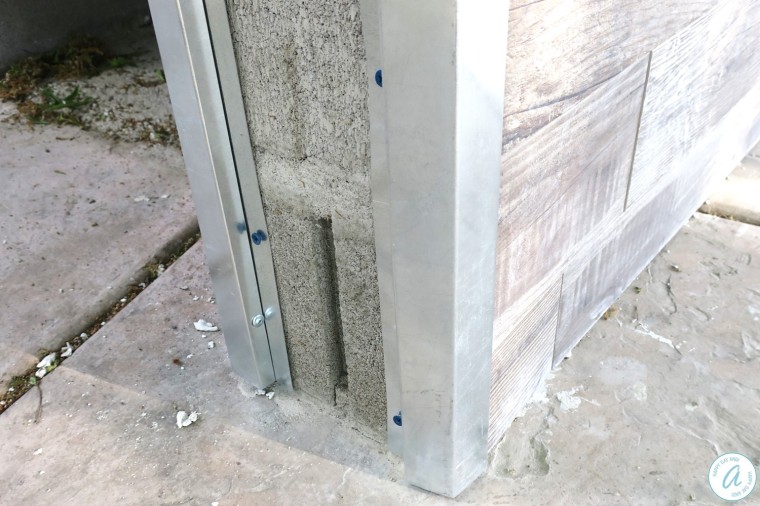 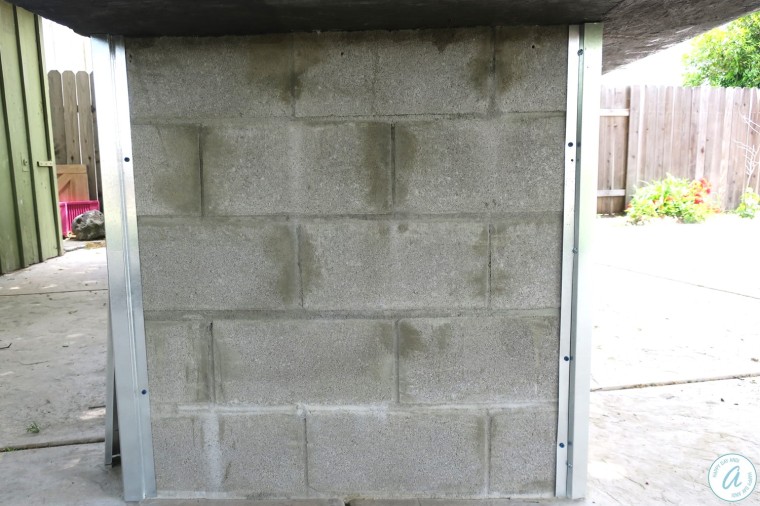 I opened up the first 4 boxes of tile and organized the tiles. There are quite a few different patterns, but there are definitely repeats. I wanted to make sure that the tiles with the same patterns didn’t end up near each other. Organized randomly…

To actually start tiling, we ran a string along the bottom row. We decided to keep the tile level horizontally, so not level with the patio, since the patio slopes for drainage. The hubby had to shave off the bottom row to slope with the ground. It didn’t end up being too tricky, so that was a relief.

From there, the only cuts we had to do were at each end. We used an exterior grade thinset to stick on all of the tiles. Fun discovery, they don’t make premixed exterior grade thinset. Not at Home Depot anyways. So sad. Luckily it wasn’t too tough to mix, but it is impossible to save once you are done for the day.

Anyways, we just went row by row and worked on the most important side of the bar first. 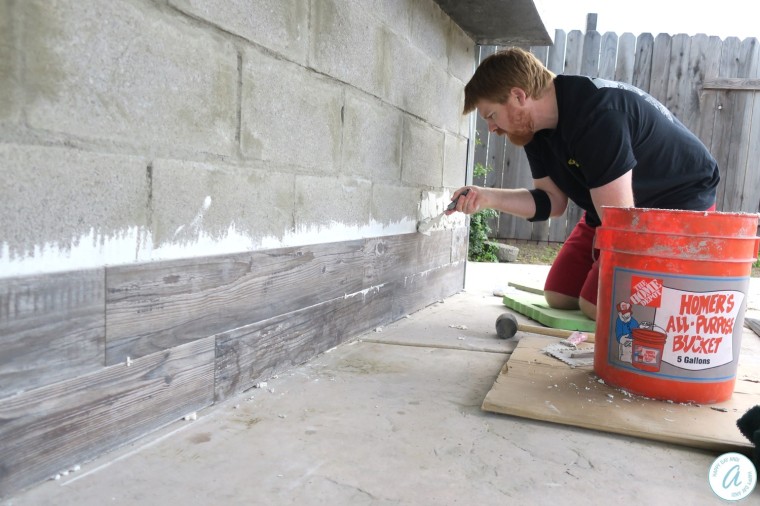 And it was 100% the hubby’s idea to lay down that cardboard. I just don’t think of these things!

We did have to shave the top row of tile to get it to fit. And once we were done with the long side, we were able to quickly wrap up one of the other edges. So at least from the front and the entrance side, the bar looks amazing. And in the end, we really do love how the tile turned out. Even if it wasn’t our original vision. It might actually be too small of a space to have that much color variance. So it really couldn’t be any better!

I also got started on probably my favorite part of the whole bar. But that will stay a surprise until next week’s reveal! Stay tuned! And be sure to check out what the rest of the guest participants are up to!

Scott put up Abby’s swing today! Loki’s not too sure about it, but he will get used to it
Well, I lasted about 6 months before starting a new big project with a baby. Not too bad, right?! PS, pray for my sanity. Who puts 2 layers of wallpaper followed by texture...
Teaching our little girl to fist bump. Who knew it was so funny 😍😂
5 months old as of a few days ago! No, she doesn’t have any teeth yet, but she likes brushing her teeth with us in the morning 😂
We are thinking this little girl is going to have some strong little legs
Conversations with miss chatty Abby
Crawfish and Abby’s first swim = a successful day!
And just like that, it’s summer weather ☀️☀️
Her little feet might still be way off the ground, but I think Abby likes her Jeep 🚘