While we continue working on the bathroom remodel, I figured I would show you guys what we have done to the living area! This was definitely the most time consuming part of the house to work on, but so far, probably the most rewarding. When we got the house, the living area was filled with shag green carpet, a tiny door to go to the back yard, no lighting, and veneer wall paneling. The only thing we really liked about it was its size and how the dining area and the living area were open.

The BF started everything out by ripping off the wall paneling “just to see what’s underneath.” Then there was no turning back. That was the first to go. Then, since we had a lot of the walls open, we installed recessed lighting. We put in two rows in the living area that would function separately from each other, and four in the dining area that could be controlled from either side of the room. We also got all of the wiring set up for a ceiling fan. They did have a fan installed, but we learned that it was very sketchy and that if anything went wrong our entire attic could catch fire. Luckily, my dad knew how to install all of this, so after reading a couple of old manuals we got it all figured out. The lights made such a difference!

Next up was the window and doors. We did like how the window in the living area was big, but we wanted it bigger. There isn’t too much natural light because of the way our house is situated, and we wanted to maximize it. We cut out an extra foot along the bottom of the original window opening, and chose a new window that was completely clear. It was amazing how much it really opened up the room even more! 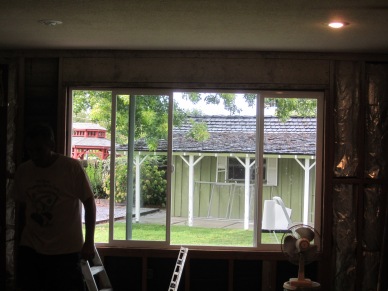 The door was a piece of work. There was an eight foot wide window where we wanted to put in french doors. We didn’t need to extend the sides of the window frame, but we did need to extend the top and bottom extents. Since we had to extend the top, we need to re-brace the ceiling along the top frame of the door. I hid in the hallway while this went down. No way I was going to get crushed by a falling ceiling. It turned out in the end, but once we had temporarily braced the new frame, we hurried to get the new permanent brace in. After that, the guys just popped the door in. We all held it in place while my dad went around to screw it into the frame, and voila! New french doors! 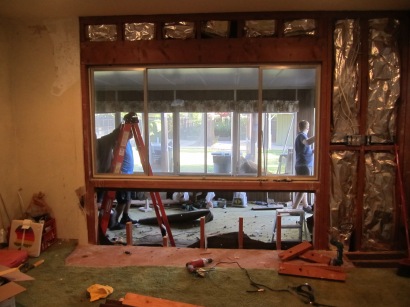 We did hire someone to come close off the old door. My dad boarded it up with a piece of plywood, and a guy came over and stuccoed along the outside of the house. We have yet to paint it on the outside. Someday we will get there.

After the door went in, we were able to put up the new sheetrock and texture the walls. Other than waiting for each new layer of mud on the sheetrock joints, this went surprisingly fast. We just used a hopper for the texturing and I had to let it dry before I started painting! Keep in mind, we already had the flooring sitting in the garage and around the house. We were very anxious to get that in!

While all of this was going on, the BF had a separate project. He was moving the cutout in the brick wall a little lower to make it more appealing. He sized it out for the TV he wanted, without making it seem out of place. He used a tile saw to cut out brick along the wall, keeping as many whole bricks as possible. He then used the brick he had removed and laid it along the top of the wall. We got a steel “L” beam to support the brick above the opening. Once the opening was completed, my dad made a box with a frame for the TV. We stained is a dark walnut color, and set it in the new opening, and it turned out great! 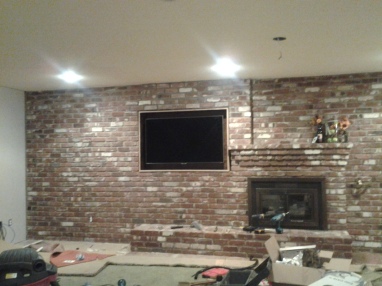 We also wanted to replace the beam between the living and dining areas. The current one was not only bowing, but there was also a 2 foot piece of wall sticking out along the side near the kitchen bar. We figured it was now or never if we were going to replace it, so we went for it! My dad did all of the calculations for the size beam we needed. It turned out that the beam not only supported the ceiling, but it also supported the roof, which called for a bigger beam size than we originally thought. The size that we needed was a few inches shorter than the current beam, and a little bit thinner too. To install the new beam, we made a temporary wall to support everything. Then, my dad and the BF took out all of the nails from the old beam and tried to let it slowly come down from the ceiling. That thing weighed a ton! Then they somehow managed to put the new beam in line with the space on the ceiling it needed to go. They slowly lifted it up, raising each end little by little. They braced it up as they went, and when they got it to the top of the ceiling where it needed to go, they secured it tightly. Taking out the temporary supports was terrifying. If anything went wrong with putting in the beam, that was the time to find out! Luckily, it worked perfectly! 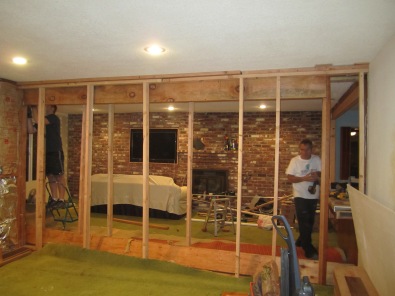 Once all of the messy projects were done (or close enough), I got to start painting! We decided on a textured paint look, using a sea sponge to get the look we wanted. The undercoat is a very subtle, buttery yellow color. We also used that color for the ceiling to tie everything in. It was very nice not having to make it perfect, knowing that I was going to cover it in spongy texture. After the base coat was done I used the sea sponge to put on a layer of a deeper, more golden yellow. I watered down the paint just a little bit to lighten it up and to make the texture a little thinner. It didn’t take too long to finish that off, especially with the flooring as motivation.

After the painting came the floors! We got a hand scraped, darker walnut floor. The planks were all four inches wide but were all different lengths. We laid out the underlayment as we went, and started snapping all of the boards together! We started down the hallway, since that was the longest length of the floor, and went towards the back yard. All we had to do was put special wood floor glue on the connecting slats of each board, and snap them together! It was like a puzzle trying to make it look random with the colors of the boards and the sizes. You could really tell that all of us are wired to make patterns in our mind, but I think in the end it came out pretty random. 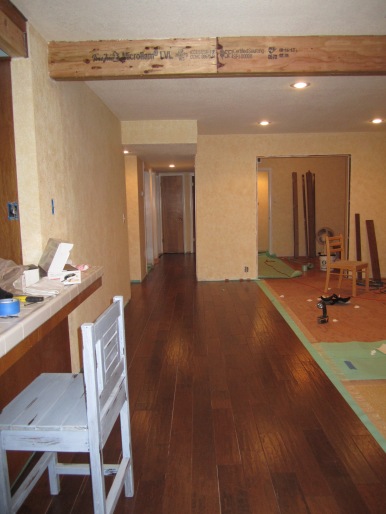 Once the floors were in, all that was left to do was decorate! Of course, it isn’t even close to being fully decorated, especially since the dining table and the sofa are hand-me-downs, but it’s a good start! 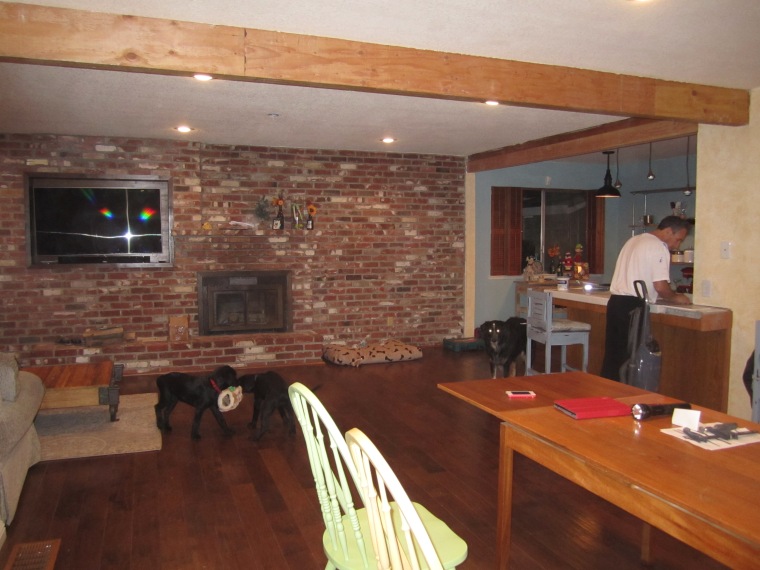